I am currently going through my interview and my investigator asked why I did not list my Domestic Violence cases. These cases were dismissed and in the State of Colorado a successful deferred sentence is not a conviction. However, the investigator is saying that as part of the deferred I had to plead guilty initially which means that it is a conviction. Then the investigator re-read the question that says have you ever been convicted of domestic violence and said “I don’t really know. I am going to have to check on this.” T

The investigator then called me and said “we’ll still have to go over the cases, because I am not getting a clear answer from the other investigators I spoke to.”

The investigator has only been investigating since beginning of Summer 2022.

Any guidance would be appreciated.

Did you ever plead guilty as part of the deferment?

What about the questions on arrests? If you were arrested, I always tell folks to put it down and bring it up to the investigator. They will see it. You bringing it up means no surprises and no chance of anyone saying you tried to hide it. Not saying you are/were. But to paint a picture…an arrest happens. Not a big deal. Covering it up…presents a different challenge. And that is a much harder thing to clear 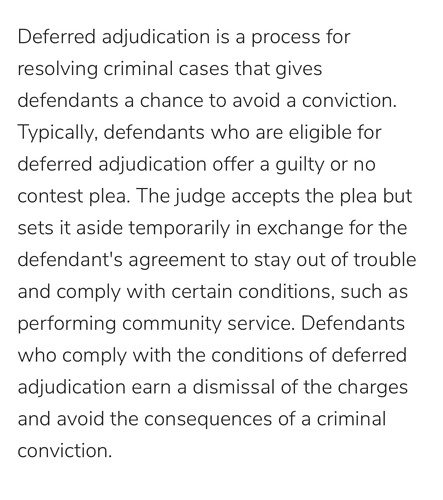 This is how I understand it. So, if I put no, do I just relay to investigator why I put no and go over them?

Assuming your form was the SF-85P as Amber Bunny already mentioned, if this was an SF-86, the arrests would have been listed anyway.

The arrests section only asks for the last 7 years. So I put “no” to that.

The DV happened over 17 years ago. Deferred and Dismissed upon completion.

Thanks! I meet up with the investigator later today. I really appreciate the help!

If the original charge (no matter the final disposition) was a felony, it is an ‘ever’ timeframe question.

This is a good time to explain a bit of the process.

The security and suitability investigation process is focuses largely on the “whole person” concept. This means if a behavior is one off or rehabilitation is completed with no additional instances, the Subject is usually cut a huge break.

This also means we are not concerned as much whether a court case is dismissed but how/why it is dismissed as well as the original reason for the court case.

The even bigger concerns are repeated behavior and/or unwillingness to accept responsibility.

DUI is a great example… Subject gets a withheld judgement as part of a plea agreement, the Subject still drove while intoxicated. The other court favorite, the Subject plea agrees to “reckless driving” instead of the DUI, but still has to complete the normal requirements for the DUI offense.

The background investigation process is not a gotcha process but an information gathering process. Arguing whether or not the FINAL outcome is reportable is the wrong argument. The incident/behavior/issue occurred and you are given the chance to report the basic facts yourself or explain to an investigator why you tried to hide the incident.

“Be honest and no surprises” is the best advice you will get in here.

It definitely sounds like you are dealing with an inexperienced investigator. The small amount of initial training each investigator gets does not make them any type of experts in law or court procedures, but many think they are. This is especially true because of the state to state differences in each law and court systems/procedures. The simple statement of “i didn’t list this information because the questioning of the form did not appear to ask for this information” should be good enough, especially if it is accompanied with honesty and candor regarding the explanation of the situation not “listed” on the form.

Unless it’s an “ever” question.

The “ever” definition isn’t the debate. It’s the definition of charged, convicted, expunged, arrested, detained, etc. etc. and the whole plethora of other legalese terms that it takes 4 years of law school in each specific state and a state specific bar exam for anyone to fully understand, and that may even be a stretch.

I am more worried now that my investigator is inputting the correct information. The investigator keeps mixing up the dates and seems completely unorganized.

I feel like I need to draw a map with dates, so that the investigator inputs it correctly…

Also, the investigator keeps saying “off the record” to me about things on my clearance investigation.

This is my livelihood and this investigator is really scaring me due to lack of organization.

You should definitely contact someone. You should feel better about the person handling all of your personal information and data. Start with this: Verify Investigator Identity

OF 306… I had an arrest for traffic misdemeanor 5 years ago which was dismissed without going to court, but I did not list it because I read the form as “if dismissed do not list” (question 9), but is that incorrect?

what does the OF306 instruct? You can google the form. I only see one rarely and normally as part of the SF86 or 85 series questionnaires.

THE OF 306 asks for convictions, imprisonment, parole but NOT arrest without conviction so it is confusing because if arrested but then dismissed, is that a YES to question 9 or a no? and then the explanation in box 16 either way? Thank you. The SF86 asks for arrests as well. But I read that the 306 must match the SF86. Thank you.